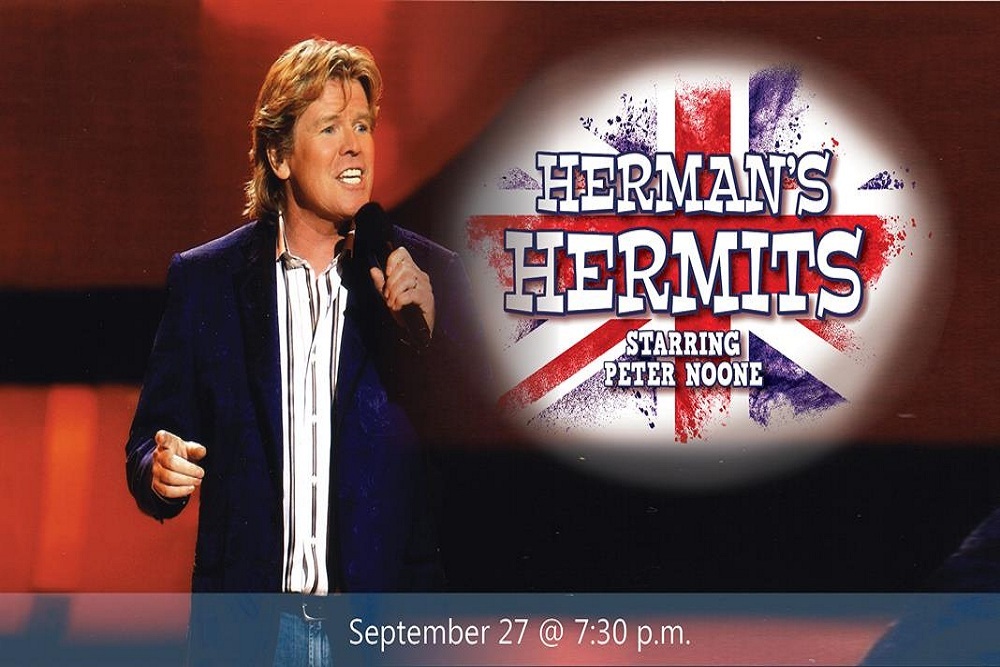 First State Bank of Belmond and KGLO proudly present the sold out performance of Herman’s Hermits starring Peter Noone at the North Iowa Community Auditorium on the NIACC campus at 7:30 p.m. on Friday, September 27, 2019. This presentation is part of the 2019-2020 Performing Arts and Leadership Series.

Peter Noone is a multi-talented entertainer who has been dazzling and captivating audiences for years. At the age of fifteen, Noone got his claim to fame as lead singer of the legendary ‘60s pop band, Herman’s Hermits. He has numerous classic hits, including “I’m Henry VIII, I Am,” “I’m Into Something Good,” “Mrs. Brown, You’ve Got A Lovely Daughter,” “Silhouettes,” and many others. Ultimately, Herman’s Hermits sold over sixty million recordings, with fourteen singles and seven albums going gold. The Hermits were also named Cashbox’s “Entertainer of the Year” twice.

As “Herman,” Noone graced the cover of nearly every international publication including Time Magazine. He performed on hundreds of television shows and appeared with such luminaries as Ed Sullivan, Jackie Gleason, Dean Martin and Danny Kaye. Throughout the seventies, Noone collaborated with countless musicians, such as David Bowie, Graham Gouldman, and Debby Boone. His album produced with the Tremblers, “Twice Nightly,” and his hit-single “One of the Glory Boys” reached commercial success.

Accompanied by his extraordinarily talented band, Herman’s Hermits, Noone plays to sold-out concert venues all around the world. His legion of faithful fans, known as “Noonatics,” have unwavering loyalty to the band. In his most recent mass media appearance, Noone played as “Paddington” on the CBS daytime drama, “As the World Turns.” With his lively wit, colorful performances, and out-of-this-world talent, there is no doubt that Peter Noone and Herman’s Hermits will continue to astound audiences for years to come.

To learn more about Peter Noone, visit www.peternoone.com or watch a video at www.niacc.edu/palvideos.

This performance is sold out.

The Broadway sponsor for the 2019-2020 Performing Arts and Leadership Series is Drs. Beck, Bhangoo, and Ondoma: Neurosurgery of North Iowa, P.C.

Want to get notified whenever we write about North Iowa Area Community College ?

Sign-up Next time we write about North Iowa Area Community College, we'll email you a link to the story. You may edit your settings or unsubscribe at any time.